I received this email this morning from Yasodanandana Prabhu:

There are original, unrevised, first edition, unadulterated, bona fide sets of Srimad-Bhagavatam available. This has been confirmed and duly reconfirmed by devotees in England, Australia and America. I humbly suggest that you should take advantage of this opportunity while they are still available.

Yours in Srila Prabhupada’s service and in the service of His bona fide disciples.

It is available through Krishnastore.com
Srimad Bhagavatam Set [Original 30 Volume]

“This Srimad Bhagavatam is as brilliant as the sun, and it has arisen just after the departure of Lord Krishna to His own abode, accompanied by religion, knowledge, etc. Persons who have lost their vision due to the dense darkness of ignorance in the Age of Kali shall get light from this Srimad Bhagavatam.” (Srimad-Bhagavatam 1.3.43)

This new printing is an exact replica of Srila Prabhupada’s original Srimad-Bhagavatam set printed between 1970 and 1977.

This edition of the Srimad Bhagavatam, with elaborate commentary, is the most widely read and authorative translation available to the English speaking world.

With translations and elaborate purports by His Divine Grace A.C. Bhaktivedanta Swami Prabhupada.

From the Preface:
Human society, at the present moment, is not in the darkness of oblivion. It has made rapid progress in the field of material comforts, education and economic development throughout the entire world. But there is a pinprick somewhere in the social body at large, and therefore there are large-scale quarrels, even over less important issues. There is need of a clue as to how humanity can become one in peace, friendship and prosperity with a common cause.

Srimad-Bhagavatam will fill this need, for it is a cultural presentation for the re-spiritualization of the entire human society.”

Srimad-Bhagavatam is the transcendental science not only for knowing the ultimate source of everything but also for knowing our relation with Him and our duty towards perfection of the human society on the basis of this perfect knowledge.

It is powerful reading matter in the Sanskrit language, and is now rendered into English elaborately so that simply by a careful reading one will know God perfectly well, so much so that the reader will be sufficiently educated to defend himself from the onslaught of atheists. Over and above this the reader will be able to convert others to accept God as a concrete principle.

Srimad-Bhagavatam begins with the definition of the ultimate source. It is a bona fide commentary on the Vedanta-sutra by the same author, Srila Vyasadeva, and gradually it develops in nine cantos up to the highest state of God realization.

The only qualification one needs to study this great book of transcendental knowledge is to proceed step by step cautiously and not jump forward haphazardly like with an ordinary book. It should be gone through chapter by chapter, one after another.

The reading matter is so arranged that with its original Sanskrit text, its English transliteration, synonyms, translation and purports so that one is sure to become a God-realized soul at the end of finishing the first nine cantos.

I must admit my frailties in presenting Srimad-Bhagavatam, but still I am hopeful of its good reception by the thinkers and leaders of society on the strength of the following statement of Srimad-Bhagavatam:

“That literature which is full with descriptions of the transcendental glories of the name, fame, form and pastimes of the unlimited Supreme Lord is a transcendental creation meant to bring about a revolution in the impious life of a misdirected civilization. Such transcendental literatures, even though irregularly composed, are heard, sung and accepted by purified men who are thoroughly honest.” 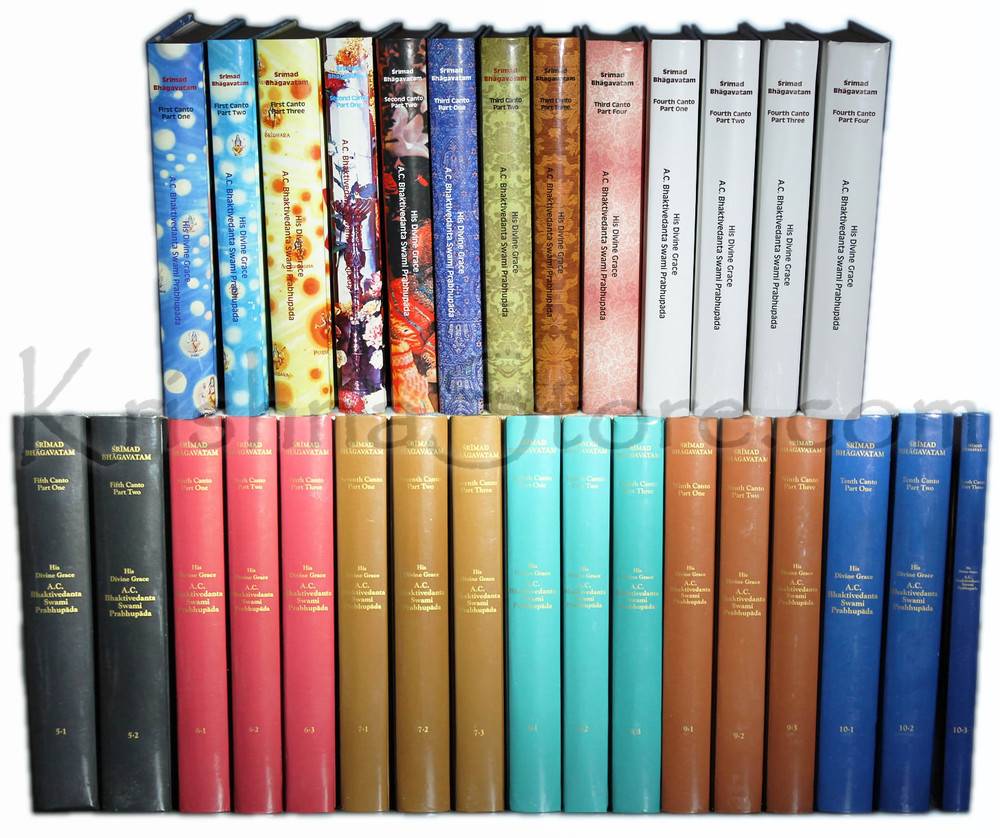 It is available through Krishnastore.com
Srimad Bhagavatam Set [Original 30 Volume]